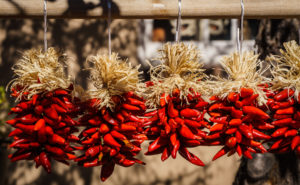 First-time visitors to Santa Fe may find themselves alternatively delighted and puzzled by the strands of red chile pepper pods seen hanging around the city. These strings of fruit (yes, fruit!) are called ristras, and they have become synonymous with Southwest culture and cuisine. Now widely used as decorations, the red chile peppers are the riper
version of the green chile peppers so widely associated with New Mexico cooking. Dried
red chiles are just as frequently used in New Mexico dishes, and both New Mexico Hatch

green chile and Chimayo red chile are prized for their distinctive flavors. When eating
out, you will often hear the question: “Red or green?” And you might ask in turn,
“Which is hotter?” The diner who orders “Christmas” is asking for both green and red
chile to be served with the same dish. Try both and get your chile on!

In addition to its signature architecture, downtown Santa Fe is rich with artwork within sight of the most casual pedestrian observer. From statues of historic figures, such as Archbishop John Baptiste Lamy and St. Kateri Tekakwitha (the first Indian of North America to be thus promoted), to rearing bronze horses and dragons perched overhead, the downtown area is dotted with fascinating sculptures and other creative works in
public view.